EU migration policies: inhumanity in law and in practice vs alternatives

The experience of the Covid-19 crisis: the future of health in Europe

News from the frontline: fighting racism and the far-right during the pandemic 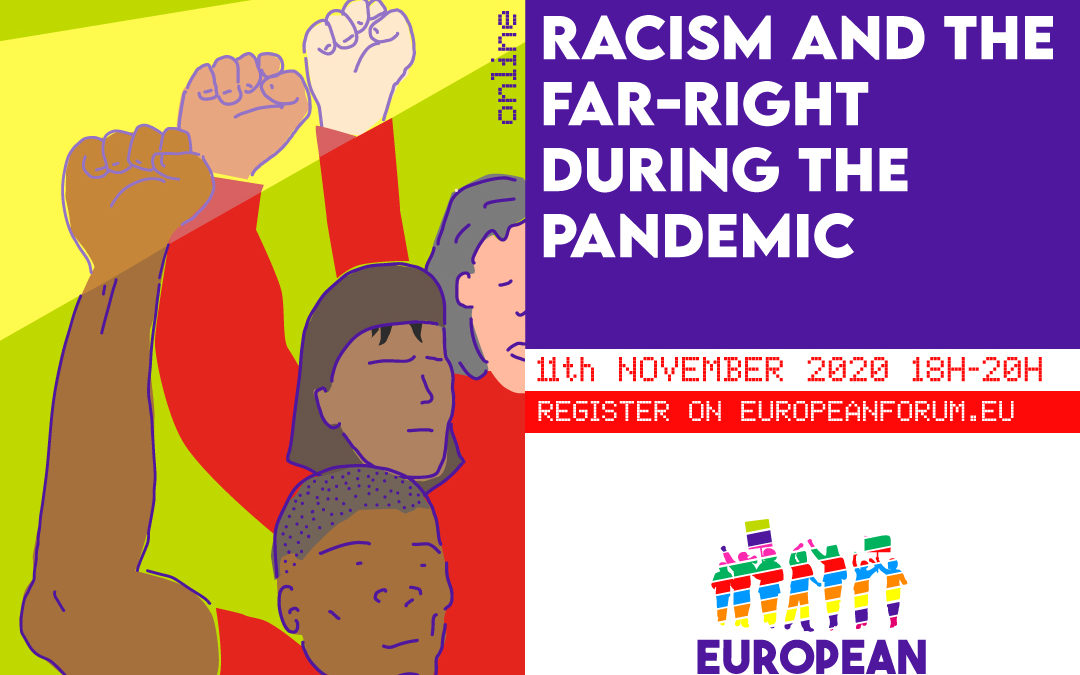 Based on the stories and the experience of those who are on the front line in the fight against the far right, this session allows us to explore the diversity of strategies that we, left organisations of different natures, are putting in place in this fight and also to develop new strategies collectively.

This collective work is all the more important during this health crisis that the far right is using for its own benefit. Scientific scepticism, withdrawal into oneself, mistrust of others, massive dissemination of fake news, are all powerful levers that nationalist forces use to fuel and propagate their ideology.

This session was an opportunity to recall the strategies and tricks used by the extreme right:

– Ideologically these organisations predominantly led by white men stage a crisis of masculinity and an alleged peril that would face the white Christian culture, to put in place policies against women and ethnic minorities.

– They go against science during the health crisis or the ecological crisis.

– Set up “anti-political” speeches and practices with the dissemination of lies, by labelling alterity as dangerous to break social links and solidarity mechanisms and create divisions so that those who are the most vulnerable fight against other vulnerable people.

– Also recall that their economic agenda is deeply neoliberal: these organizations advocate for the dismantling of social protections and the deregulation of markets.

– If, with the election of Joe Biden, the extreme right has lost its main reference in the Racist International, it remains powerful in spite of everything and continues to organise itself internationally, notably with Le Pen, Bolsonaro, Salvini.

What strategies can progressive forces put in place?

To face these forces, participants proposed strategies that could be deployed on two scales of action. The direct ideological struggle first, but also the need to build an independent agenda that rebuilds social ties, a bulwark against the extreme right.

– Deconstruct the discourse of the far right and in particular their populist discourse. First, by deconstructing their lies; denouncing the inconsistency of an anti-system posture by unveiling their neoliberal agenda.

– To fight collectively against scepticism, particularly in this period of pandemic. Through joint declarations, but also through popular education, which can help people unpack this discourse by developing critical thinking.

– Fight against fake news and the monopolization of public speech by reactionary speeches which are becoming the norm: working towards an overhaul of the media, that is to say putting an end to the logic of commodification of information, growing job insecurity for journalists preventing them from doing in-depth work, or even denouncing the fact that the media are owned by the dominant class. Consequently, work towards a public information service or the development of independent media.

– Exposing the scandals of the extreme right for the public but also through justice: exposing neo-Nazi networks, exposing violent organisations, but also exposing scandals of corruption, money laundering or the spread of hate speech or hate crime within these official political organisations. We can give the example of the recent judgment of the leaders of Golden Dawn in Greece.

– Carry out work to analyse changes within these forces, their networking strategies and their presence on networks, etc. By mobilising the social and political sciences and by developing observatories and monitoring networks.

Panelists also supported the need to build an independent agenda geared towards public opinion. So as not to fall into their trap.

– Rely on the dynamism of civil society social movements. The movements against the abortion ban in Poland, BLM in the United States, the climate movement in France… Participants insisted on the need to welcome the radicalness of these social movements, the need to join them and to thrive on them.

– Strengthen the structures that make populations strong and autonomous: develop the welfare state: schools, higher education, health but also associations and everything that creates social ties

– Help minorities, fight against the isolation of precarious people and against experiences of vexation. Put in place policies that reassure the most vulnerable to prevent them from subscribing to far-right theses.

– Do a memory work on the history of these organisations: recall the crimes they committed and disseminate this history, develop school programs that cover certain blind spots that persist

– Develop speeches of hope to counter the hate speech of the far right: show that it is possible to live well, to build a society in which everyone can have a good life, to push these utopian visions. In the public sphere ans in the private sphere: stop accepting attacks against fundamental rights

– Organise at European and international level (anti-fascism is a founding value of the European Union) by reaffirming our common values ​​within existing networks. (example No Pasaran conference to be held in spring 2021 in Berlin)

Finally, we can recall the phrase of Urszula Kuczyńska: We must fight against the screams of those who are filled with hatred and listen to the silences of those who have no voice.